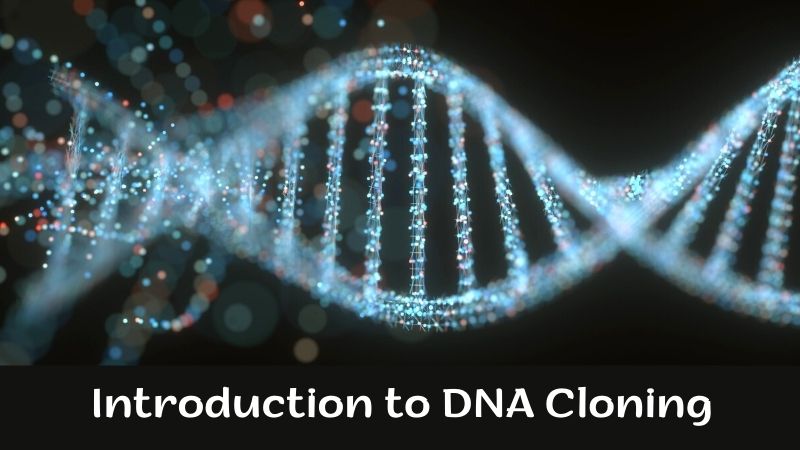 DNA cloning is one of the ways to create many identical copies of a piece of DNA, for example, a gene.

In a classic cloning experiment, the target gene is inserted into a circular DNA molecule called a plasmid.

The plasmid is introduced into bacteria through a process called transformation. Bacteria carrying the plasmid are selected using antibiotics.

Bacteria with the correct plasmid are used to produce more plasmid DNA or, in some cases, for gene expression and protein production.

When you hear the word “cloning,” you may be thinking of cloning entire organisms, such as Dolly the sheep, at that moment. However, the word clone only means creating a genetically exact copy of something. In a molecular biology laboratory, a gene or some small piece of DNA is most often cloned.

If your friend, a molecular biologist, says that she can’t “clone”, she or she almost certainly means copying DNA fragments, not creating another Dolly!

DNA cloning is the process of making multiple identical copies of a specific piece of DNA. In a typical DNA cloning procedure, a gene or other DNA fragment of interest (possibly a gene for some medically important protein) is first inserted into a circular DNA molecule called a plasmid. Insertion is performed using enzymes that “cut and insert” DNA, resulting in a molecule of recombinant DNA or DNA assembled from fragments obtained from several different sources.

The recombinant plasmid is then introduced into bacteria. Bacteria carrying the plasmid are selected and grown. In the process, they replicate the plasmid and pass it on to their offspring, thus making a large number of copies of DNA.

What is the point of making multiple copies of plasmid DNA? In some cases, we need this to conduct experiments or create new plasmids. In other cases, a piece of DNA encodes a useful protein, and bacteria are used as factories to make that protein. For example, the human insulin gene is expressed in E. coli to produce insulin used by diabetics.

DNA cloning is used for many purposes. As an example, let’s see how DNA cloning can be used to synthesize a protein (like human insulin) in bacteria. The main steps in this process are as follows:

Let’s take a closer look at each step.

How can DNA fragments from different sources be connected? Two types of enzymes are commonly used: restriction enzyme and DNA ligase.

Restrictase is a DNA-cutting enzyme. It recognizes a specific target sequence and cuts DNA at or near that location (site). Many restriction endonucleases form ends with short single-stranded protrusions. If two molecules have matching overhangs, they can be linked by complementary nucleotides. However, they cannot bond to form a continuous DNA molecule until DNA ligase is attached to them, which will bind them into a single DNA molecule.

The purpose of cloning is to insert the gene of interest (for example, the human insulin gene) into a plasmid. Using a carefully selected restriction enzyme, we get:

We then combine the fragments with DNA ligase that binds them to create a recombinant plasmid that carries the gene we want.

2. Transformation of bacteria and selection

Plasmids and other DNA can be introduced into bacteria, such as a harmless bacterium such as E. coli. It is used in laboratories during the transformation phase. During transformation, specially prepared bacterial cells undergo a so-called shock (for example, strong heating), which prompts them to absorb foreign DNA.
DNA obtained by ligation (it can be a mixture of plasmids that we need encoding some by-products, or linear DNA fragments) is added to the bacteria. The bacteria are exposed to heat shock, which forces them to absorb DNA during the transformation process. However, only a small number of bacteria will be able to successfully take over the plasmid.

DNA obtained by ligation (it can be a mixture of plasmids that we need encoding some by-products, or linear DNA fragments) is added to the bacteria. The bacteria are exposed to heat shock, which forces them to absorb DNA during the transformation process. However, only a small number of bacteria will be able to successfully take over the plasmid.

The plasmid usually contains an antibiotic resistance gene that allows bacteria to survive in a culture medium containing a particular antibiotic. Thus, bacteria that have captured the plasmid can be selected on plates with a special culture medium containing an antibiotic. Bacteria without a plasmid will die, and bacteria carrying the plasmid will live and multiply. During division, each surviving bacterium forms a small point group – a colony of identical bacteria carrying the same plasmid.

Not all colonies will necessarily contain the correct plasmid: during ligation, DNA fragments do not always insert exactly as we expect. Therefore, we must collect DNA from several colonies and see if each of them contains the plasmid we need. Methods such as restriction analysis and PCR are commonly used to test plasmids.

Once we have found a bacterial colony with the desired plasmid, we can grow a large bacterial culture from it. Then you can send a chemical signal to the bacteria so that they begin to produce the protein we need.

Bacteria serve as miniature factories that create large amounts of protein. For example, if our plasmid contained the human insulin gene, bacteria would begin to transcribe the gene and translate mRNA to produce a large number of molecules of the corresponding protein.

After the protein has been created, bacterial cells break down to release it. In addition to the target protein (such as insulin), there are many other proteins and macromolecules in bacteria. For this reason, the target protein must be purified, or separated from the rest of the cell contents using biochemical methods. The purified protein can be used for experimentation or, in the case of insulin, administered to patients.

DNA molecules created by cloning are used in molecular biology for a variety of purposes. Here are just a few examples:

In scientific research laboratories, biologists often use DNA cloning to create artificial recombinant versions of genes that help them understand how normal genes function in the body.

These are just a few examples of how DNA cloning is currently being used in a wide variety of fields in molecular biology.