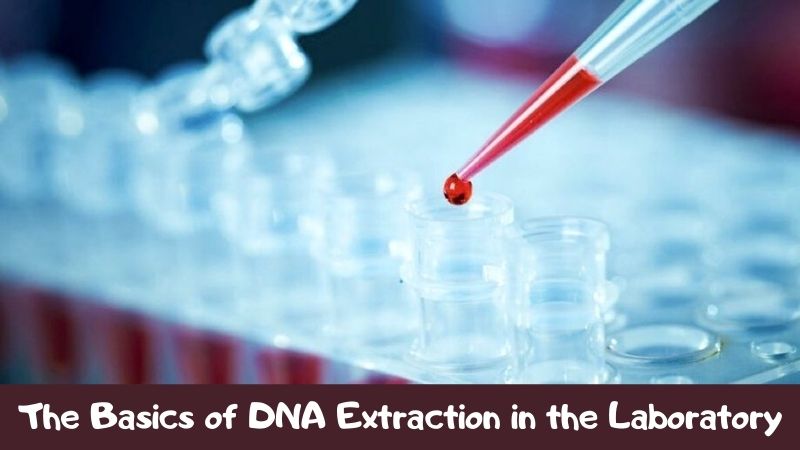 We will tell you how the first stage of genetic research is going on – the isolation of genomic DNA from biological samples.

DNA is a long, negatively charged molecule: it codes for the assembly instructions for individual proteins, cells, tissues, and whole organisms. DNA is found in all cells with rare exceptions: for example, mature erythrocytes of mammals lose their nucleus with genetic material in order to better carry oxygen. Therefore, DNA can be isolated from any tissue of a living or dead organism – the only question is how much effort will have to be spent.

Modern labs have successfully worked with pine needles, stem cells, yoghurts, frog embryos, mouse hearts, and Staphylococcus aureus, and the author of this article isolated DNA from canned corn in a student workshop. But most often a person’s blood or saliva becomes a source of genetic material for analysis.

Biomaterial processing and DNA extraction is the first stage of molecular biological research. The genetic material is stored in the nuclei of cells that need to be destroyed, otherwise the DNA will not come out into solution and will be inaccessible for analysis. Part of the DNA can be released from animal cells by simple heating, but this will not work with plant cells: they are protected by a strong cell wall made of cellulose.

For the analysis to be successful, it is important to purify the DNA from impurities. Impurities inhibit the activity of enzymes that are needed to prepare a sample for analysis on a sequencer or chip analyzer.

The most common inhibitors in biological tissues are heme (a component of red blood cells that allows them to carry oxygen), collagen in bones and other connective tissues, melanin in hair and skin, aromatic compounds in plant samples, and myoglobin in muscle tissues. In saliva, the analysis is interfered with by food debris and a preservative used to store and transport the sample: it contains SDS, which inhibits the work of enzymes. During transportation, SDS protects DNA from destruction, but when it enters the reaction mixture, it disrupts the work of DNA polymerase.

Who was the first to isolate DNA?

The Swiss physician Friedrich Mischer discovered DNA when he studied leukocytes from pus on surgical dressings. In 1869, Miescher noticed that when proteins were isolated from leukocytes, a substance with acidic properties precipitated, which he called “nuclein”. Later, Miescher used the milk of salmon fish, which he caught with his own hands in the Rhine, to obtain nuclein, and wrote about the role of the substance in fertilization. However, the role of DNA in the transmission of hereditary information was not noticed for a long time: scientists believed that it was too simple for a substance in which hereditary characteristics were recorded. Only 83 years later, the genetic role of nucleic acid was established by researchers Hershey and Chase.

In 1952, Hershey and Chase proved that hereditary information is contained in DNA, and not proteins, as previously thought. Scientists worked with bacteriophage T2, a virus that infects E.coli. A bacteriophage consists of a protein shell and a DNA molecule inside it. The shell contains sulfur atoms, and DNA accumulates 99% of phosphorus. Hershey and Chase fed the bacteriophages with radioactive isotopes of phosphorus and sulfur so that the labeled atoms would be incorporated into the shell and DNA. Scientists infect bacteria with radioactive phages and studied viral offspring. So they found out that daughter phages inherit 30% of labeled phosphorus and less than one percent of sulfur. During infection, the protein coat of the virus remains attached to the cell membrane, and only DNA gets inside it. Hershey and Chase washed the membranes from the surface of the cells to see if they were needed for the reproduction of phage offspring. It turned out that without protein “shadows” phages reproduce as efficiently as with them. The results of the experiment by A. Hershey and M. Chase became decisive evidence of the role of DNA in the transmission of hereditary information.

How is DNA isolated in the laboratory?

In a laboratory, DNA extraction is fully automated: the robot does not make mistakes and does not get tired. The selection process takes place in several steps:

How is the quality of DNA assessed?

In case of improper collection, incorrect or too long storage of biological samples, DNA in cells is destroyed. Such samples are suitable for the analysis of small fragments of the genome (for example, when establishing paternity), but unsuitable for research, where it is important to read the entire genetic sequence (sequencing) or analyze simultaneously hundreds of thousands of nucleotides in different DNA regions (genotyping on microarrays).

The absence of degradation of genomic DNA is checked by agarose gel electrophoresis. Under the action of a current, negatively charged DNA molecules move towards the anode at a speed proportional to their size. Genomic DNA of good quality looks like a clear stripe on phoresis, while low-quality DNA “shmerit” – it forms a gradient of fragments of different lengths. Such a sample cannot be taken for analysis.

What if control is not passed?

It is important that the DNA is not destroyed during transportation and storage of the biosample. For this, a preservative is added to the test tube. If there is more saliva than required, the preservative will not work. If saliva is low, there will not be enough DNA for analysis. Therefore, all tubes received at the laboratory are assessed visually and in case of problems, they are immediately sent for re-sampling.

Sometimes it is not possible to extract high-quality DNA from an externally suitable sample. The laboratory then makes a second attempt using the remaining portion of saliva to rule out technical errors. If it also turns out to be unsuccessful, sciensts invite the client for a reload and ask to carefully follow the rules for the delivery of the biomaterial: it is important that there are enough cheek epithelium cells in the saliva and there are no foreign impurities.

Unfortunately, some people’s saliva naturally contains too little DNA. Therefore, if a person fails at the “retake”, scientists suggest that he or she donate blood.

DNA that has passed quality control is sent for sequencing or genotyping on microarrays.